Since Bitcoin found a foothold in the $6,200-$6,800 range in early-August, crypto traders have been doing their best to discern where this unpredictable market will head next. But, with positive crypto-centric news becoming commonplace, there has been an unprecedented number of investors, commentators, and industry leaders that have foreseen a bottom in the tumultuous cryptocurrency market.

AngeloBTC, a well-followed cryptocurrency commentator and analyst, recently broke his one-month-long Twitter hiatus to claim that Bitcoin was seeing its “last dip ever,” alluding to the well-read theory that crypto assets are finally starting to undergo a bottoming phase.

Although some claimed that his bullish call was fueled by hope, and nothing more, the fact that such a prominent trader made this prediction comforted thousands of his 124,000 Twitter followers. While Angelo, who was BitMEX’s top trader by volume in early-2018, failed to rationalize his call with technical and fundamental indicators, there has been a multitude of industry leaders that have done that job for him.

Mike Novogratz, a former Wall Street guru turned crypto diehard, revived his dust-ridden Twitter page in early-September to claim that this market “put in a low.” Clearly tapping into his knowledge of traditional capital markets, the Galaxy Digital CEO explained that markets of any variety “like to retrace to the breakout.” So, seeing that crypto assets essentially “retraced the whole of the bubble,” Novogratz claimed that a reversal to the upside is imminent. 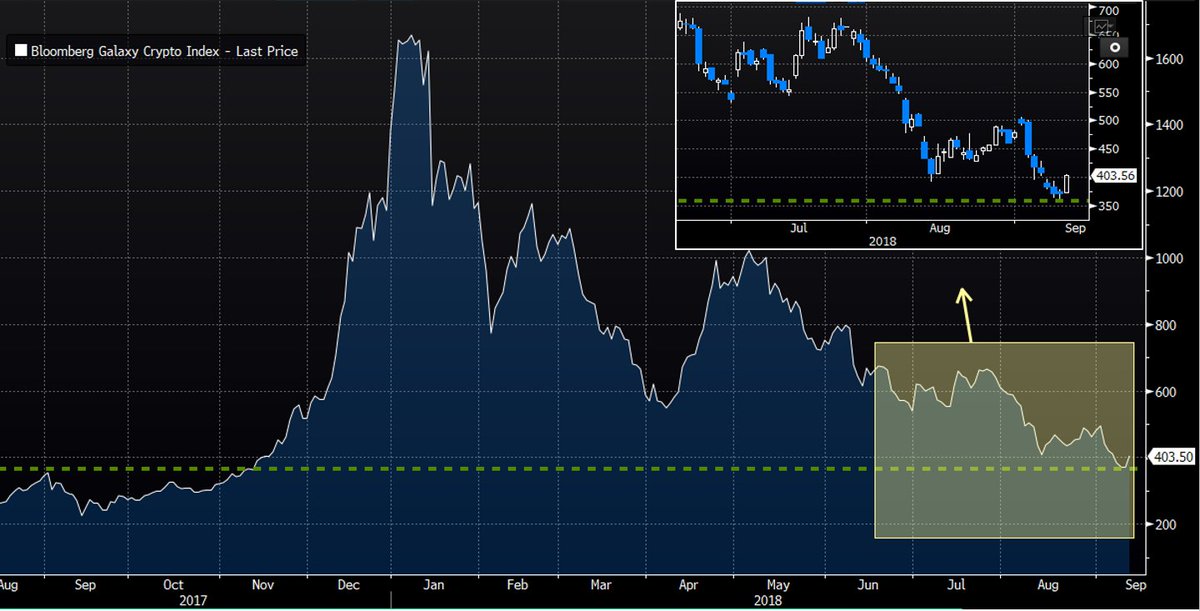 While critics of this theory may point out that the chart Novogratz highlighted is now one-month outdated, his point is still as valid as ever. One week after he issued his “#callingabottom” tweet, Novogratz took to CNBC Fast Money to highlight the other side of the coin — fundamental indicators.

Although his appearance on CNBC stretched out to a painstaking 11 minutes, a theme was consistent throughout his comments, which was that institutions are poised to allocate capital to the cryptocurrency market, adding that “institutional FOMO” is proverbially right around the corner.

Since then, however, Novogratz has since retracted some of his short-term price predictions. But, investors shouldn’t be wary, as other industry leaders picked up right where the CEO left off.  Long-time Bitcoin proponent Tom Lee, the head of research at Fundstrat Global Advisors, told his clients that $1,900 per Ether by year’s end is a likely scenario. Despite not explicitly stating it, it is likely that Lee also believes that his $25,000 Bitcoin prediction is still in the cards as well.

Crypto News Cycle Turns Positive, “Kindling” For The Next Bonfire

Blockchain Capital’s Spencer Bogart also had bullish sentiment to tout, recently claiming that while patience is essential, the long-awaited bottom is within this industry’s grasp. Giving his forecast some credence, Bogart explained that the positive developments the crypto market has undergone in the past few months will be “kindling” for crypto’s next bonfire, or growth cycle in other words.

And, as seen by the recent news cycle, this industry has undoubtedly seen its fair share of fundamental developments that will only better the experience for institutional and retail participants.

Bakkt, a cryptocurrency platform aimed at revolutionizing how institutions, retail investors, and merchants interact with this industry, is slated to launch its first product in November. If the launch of its physically-backed futures products goes according to plan, the platform, which has been formally backed by the Intercontinental Exchange, Microsoft, and Starbucks, will only increase the adoption and real-world use of crypto assets.

In a bid to seemingly undermine Bakkt’s launch or to hop on the gravy train, American banking giant TD Ameritrade joined hands with ErisX, which will reportedly offer Bitcoin, Ethereum, Litecoin, and Bitcoin Cash futures by Q2 of 2019. Some argue that ErisX is even more bullish than Bakkt, as its futures vehicle will immediately be available to TD Ameritrade’s 11 million consumers upon launch.

Not only have multinational corporations forayed into crypto through partnerships, but Wall Street giants are willing to gain a vested interest in this budding space through the establishment of crypto-focused products and services. Morgan Stanley, Citigroup, and Goldman Sachs, for example, all recently began work on offering Bitcoin derivative swaps to their clients, which will allow these firms to bring crypto trading to the mainstream.

It is important to note that the aforementioned developments are just the tip of the iceberg when it comes to positive crypto news. So make no mistake, despite the dismal performance of the market, this industry is far from dead in the water.

Although the fundamental indicators are signaling crypto’s biggest bull run to-date, as pointed out by Joseph Young, the lack of volume is still one hurdle the crypto market needs to clear before a bull run is all but confirmed.